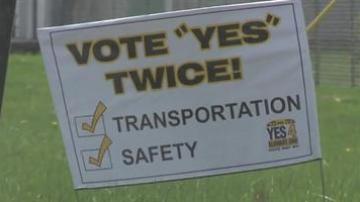 ELKHART COUNTY, Ind. -- Elkhart public school officials are pleading with voters to vote yes to two referendum items on the ballot Tuesday. They would improve transportation and make several schools in the district safer - but at a cost.

The two items on the ballot would generate $47 million over several years.

"Three things: transportation of our students, repair to our building, and the safety needs of our building," said Dr. Robert Haworth, Superintendent of Elkhart Community Schools.

A lot is at stake for Elkhart Community Schools. That’s when voters get to decide on two potential tax increases.

Both referenda would impact how students get to school and how safe they are once they get there.

A lack of funding is an issue plaguing dozens of districts statewide, but in Elkhart, the impact is more pronounced.

The cost of voting yes for both questions is just shy of $47 million stretched out over nineteen years.

A few different plans are in place for the district should Tuesday's outcome be unfavorable, but school officials remain hopeful voters will approve both referenda.