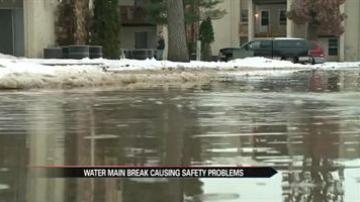 ELKHART, Ind. -- Hundreds of Elkhart residents are without water Thursday evening after a water main break.

Emergency crews are hoping to have water restored by Friday, but said it is a possibility neighbors could be out for days.

The break happened around 4:30 Thursday afternoon at Lexington Square apartment complex in Elkhart.

Tanita Bynum said it’s not safe for her kids.

“It’s too dangerous. We don’t know how deep it is or what could be up in there. So I tell them you can just look from a distance,” Bynum said.

And the problems kept flowing in.

In order to stop the leak, the utilities company was forced to turn off the water.

Neighbors like Claude Griggs say he’ll be making a trip to the grocery for bottled water.

“Could be late Saturday afternoon before it’s even drinkable, if then,” he said.

But the overlying problem on everyone’s mind is the possibility of a sinkhole.

“A lot of sand and a lot of debris have come up through the water so there’s obviously a large hole where the water’s leaking at. And they don’t want anybody getting near that where it might cave in,” said Emergency Management Volunteer Jerry Kindig.

Although the area is now roped off neighbors said the danger is still there.

“If it gives way, you’ve got a potential for somebody getting seriously hurt,” Griggs said.

Emergency management said it is unclear when neighbors will have water and when the street will be safe, but they are working to fix the problem.