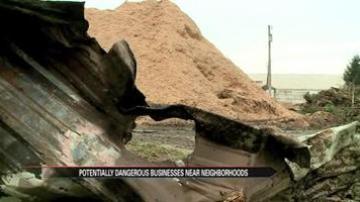 ELKHART, Ind. -- Tuesday's fire at a wood grinding operation renewed the debate about whether that type of business should be so close to neighborhoods.

"We live everyday for fear of another fire, another explosion, another death," said Wayne Stutsman.

He says fire isn't the only thing he and his neighbors are concerned about.

Chris Godlewski, the director of Elkhart Planning and Development, says it's the same problem neighbors had with Martin Animal Bedding, which caught fire Tuesday morning.

"Dust, operation outside the hours of operation, before starting time and after starting time, and those complaints in the past came from the neighbors," said Godlewski.

That's why the company's request to continue operating in that location was denied.

"That gave the indication to the landowner that he needed to do something different and at that point he decided to apply for the site several miles away," said Godlewski.

Martin Animal Bedding is in the process of moving from State Road 119 to County Road 17. The location is more secluded.

Stutsman hopes the facility near his home will do the same thing - and move so he won't have to worry about future fires or dust.

"It's not a situation where we can just go inside because it gets in the furnaces and in our house so we can't get away from it," said Stutsman.