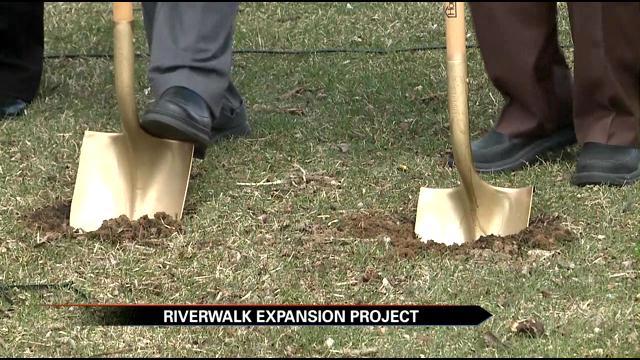 On Tuesday March 31st city officials in Elkhart broke ground for a project at the Riverwalk in Downtown Elkhart. A large crowd attended the ceremony and while some agree with the renovations others think time and money could be used else where.

“These project that include beautification along with functionality are among my favorites,” said Mayor Dick Moore during the Ground Breaking Ceremony.

Mayor Moore announced that construction is set to start April 1st. The renovations will improve the overall look of the Riverwalk.

“When a city steps in and does something then we see the private sector spending some money as well,” said Mayor Moore.

Danny Reynolds owns Stephenson's in Elkhart. The store is just a short walk from the riverfront and his hopes mirror the Mayor's.

"We know that these kinds of things that bring people to downtown they make people want to spend their time downtown and perhaps even invest in Downtown,” says Reynolds.

Reynolds says he has witnessed major projects like the Riverwalk renovation fill the parking spots in Downtown, but others think that time and resources could be used to serve other areas of Elkhart.

“Instead of continuing to invest in riverbank areas, there are road ways and street scapes that could be made to be more pleasing to the eye and create a more welcoming environment for the people who live in them. To entice more people to live in the city,” says Jason Moreno, Elkhart Party, City Council At Large Candidate.

Moreno says there are under served areas in Elkhart where upgrades could serve citizens more immediately.

“There are limited resources in city hall and when there are a lot of projects going on in areas where there are lower populations taking away from the time where they can do comparable projects,” says Moreno.

Construction begins Wednesday morning, which will close Waterfall Drive from Franklin Street to High Street until late June. The Riverfront renovation is scheduled to be complete by September 15th, 2015.
Share this article: