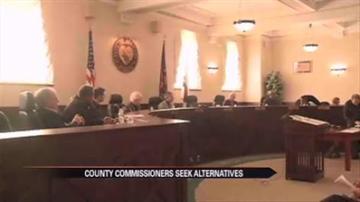 ELKHART, Ind. -- The city of Elkhart and the county are still deadlocked when it comes to Valley View residents and their connections to the city sewer.

County commissioners are sticking with their initial stance, that digging up sewer connections is not an option. Now some city council members say they need to head back to the drawing board.

At Monday night's meeting, Valley View homeowners had a serious question for the Elkhart City Council.

"Would you pay a $150 to flush your toilet?" asked Jon Nelson, one of the homeowners refusing to sign the compact.

Residents are outraged, saying their bills are high and they cannot afford the additional $50 fee being forced on them by city leaders.

Despite ongoing debate, the city council president, Ronald Troyer, says he understands that times are hard.

County Commissioners sent a letter to Mayor Moore on April 1, suggesting alternatives to severing sewer lines. The letter recommended taking homeowners to court and possibly putting liens on homes that do not sign the contract.

Commissioner Terry Rodino says their primary concerns are the health issues that would result.  "We in no way are trying to tell him what to do but just would not be able to tolerate that sort of a health issue."

Councilman Troyer says that the city and council are going to have to work together.

"There's got to be give and take on both sides."

The City Council plans to form an ad hoc committee to examine the current compacts.