Elkhart sheriff stands up for homeowners in sewer dispute 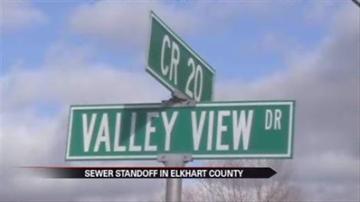 ELKHART, Ind. -- The City of Elkhart has been pressuring some county residents to pay a new monthly fee.

At the end of 2012, the city gave Valley View Hills residents an ultimatum, sign a compact agreement or else their sewer connection would be severed.

On Valley View Drive, many homeowners can still remember decades ago when they eagerly paid for a sewer connection to the City of Elkhart, but this time around, residents are not nearly as eager.

"Hope they get it settled down here pretty soon, I'm going to have to sell my home if this goes through because I cannot pay that kind of money."

Retired resident Willard Martin is one of many residents who face a tough decision, sign a new contract with the city or lose their sewer connection all together.

Martin and others in the neighborhood say they feel like they have been bullied into signing the agreement. Without their sewer pipes, toilet waste would back up into their homes.

Residents say  they cannot  imagine not having a sewer connection, especially because septic tanks are not an option in their neighborhood.

"You've got to have a bathroom, it'd be a mess I tell you." said Martin.

But now these residents have the Elkhart County Sheriff and county commissioners on their side.

Sheriff Bradley Rogers parked in a driveway of a home that is being threatened by the city.  He says that for him it's about showing support and keeping the peace.

"This isn't a matter of politics or anything else, it is just doing what's right."

The deadline to sign the contract was March 30. There are nearly 20 homeowners that have not signed yet.  It is unknown if and/or when city crews will take action on their threats.