Elkhart to bring city up to ADA standards 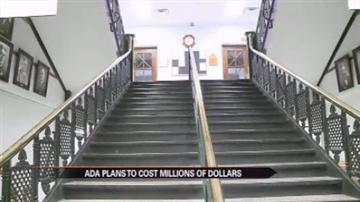 ELKHART, Ind. -- Elkhart is trying to make it easier for people with disabilities to navigate the city. Monday night the Elkhart City Council approved its Americans with disabilities transition plan. It will take a lot to bring the city up to compliance.

City Hall in Elkhart was built almost 100 years ago and today there are several areas that don't meet the regulations of the Americans with Disabilities Act.

"Those handrails don't meet ADA. Our steps, if there's any moisture on them, ADA are they in compliance. Our elevator when it was put in was in compliance. Now with the standards continually changing, it's an inch off,” said Ron Troyer, Elkhart City Councilman.

Troyer is the vice president of the Elkhart City Council and spends a large portion of his time in the city building.

He pointed out that even to getting to the elevator is a hassle for someone with a disability.

Just to reach the elevator, someone in a wheelchair has to take the wheelchair lift to the first floor, then go down the hall and around the corner.

"We definitely will address and stay on top of these because all of us have people in this city that utilize and have these concerns,” said Troyer.

Troyer was one of the council members who voted for the ADA resolution that passed Monday night.

The city estimates it will cost about $10 million to bring the entire city of Elkhart up to ADA regulations.

But Troyer says much of the work, like new curbs and lighter doors, can be done in house to save money.

For the bigger expenses like new elevators, there are alternatives.

"If we can't provide access on an elevator, we can provide you another venue to see it and hear it and be comfortable there. We can provide that at a far less cost than putting in a new elevator,” said Troyer.

The city hall will be brought up to basic compliance through 2013 and 2014.