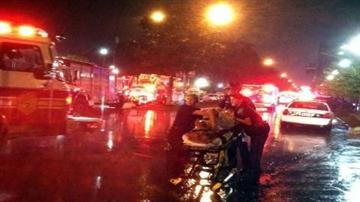 South Bend, IN - After the tragedy at the Indiana State Fair Saturday night we posted on Facebook for anyone at the fair to call us and tell us what happened.

Erica Ogle from Elkhart was at the Sugarland concert with several friends when suddenly the winds picked up and tragedy struck. Here is what Erica told ABC 57's Brian Dorman.

"You could hear it crackling and you could hear thousands of people screaming and running. People were pushing people making mad dashes to get as far away from the stage as possible. I mean, literally watched the pillars of the stage fall forward and crash down and you know people were under there."

Erica and all of her friends were able to walk away uninjured in the accident that claimed the lives of 4 people and injured at least 26 others.