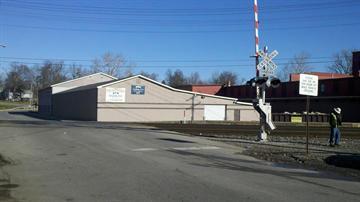 ELKHART, Ind. - An Elkhart woman is dead after her car was hit by a train in Goshen.

The accident happened Monday morning, the day after Christmas at 6:56 a.m.

Goshen fire crews rushed to the Cottage avenue railroad crossing after a witness called in the crash between a southbound car and a northwest freight train.

Emergency crews said two people were inside the car at the time of impact.

The driver, Kim Reed, 47, of Elkhart, was ejected from the car and died on the scene as a result of her injuries.

The collision is under investigation at this time. There is no word at this time as to what caused the car to be on the tracks when the train was coming.

ABC 57 spoke with a neighbor who lives next to the intersection and was one of the first on scene.

Miller said he knew what the boom was as soon as he heard it.

"I used to play by trains when I was a kid. When I was 10 or so, give or take, I saw a black van get completely crushed by a train. Fortunately, no one was in it, but it just kind of, desensitized me I guess," said Miller.

Miller rushed to his backyard where he found the vehicle still on the tracks.

"From what I could see, it hit the back end, driver's side of the car. The back was completely demolished."

Caprarotta was consious but injured. She asked Miller about Reed.

"She wasn't in the car. I went to look for her even though I knew, I knew it wasn't going to be good."

Miller found Reed 30 or 40 feet from the road. She was laying next to a memorial set up for another victim of the Cottage Avenue train tracks.