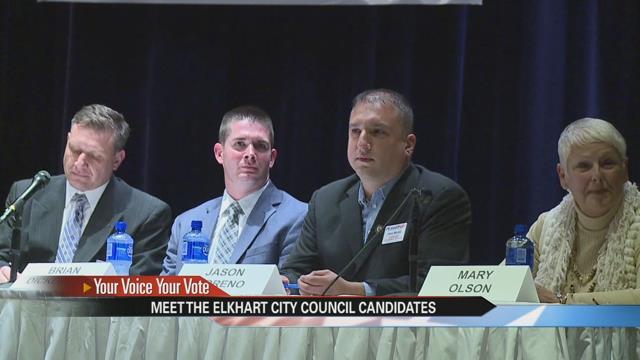 Mayoral and city council hopefuls went head to head in a candidate forum at Memorial High School on Wednesday.

Current mayor Dick Moore is seeking his third term and is up against former state lawmaker Tim Neese. Neese also served 14 years on the city council.

The vote is just 20 days away and while both mayoral candidates have gotten a lot of the public spotlight, Wednesday’s forum was a chance for many city council hopefuls to introduce themselves to the public.

In the 1st District, current councilman Dave Osborn is fighting to keep his seat against Richard Shively.

In the 3rd District, current councilman David Henke is running against Chad Crabtree.

In the 4th District, both new to the council, Dwight Fish is running against former Marine Jason Mills.

Candidates sounded off on a variety of issues including crime and law enforcement.

“Why did this administration not publish crime statistics like all the communities around us did?” said Henke.

“I think quality of life is a big impact of where people decide where they live, work, and where they play,” said Crabtree.

“We have a law enforcement that is continuously working diligently to stop crime and fight crime,” said Hines.

The third forum of the night was for the nine candidates running for the three council at large seats.

“A community as a whole is stronger than any individual who wants to lead it,” said Moreno.

The candidates discussed the issues most important to them.

“I don’t feel that they find themselves connected to our government in a way that provides for good communication,” said Brian Dickerson.

“A spirit of trust with in the entire community,” said Franklin.