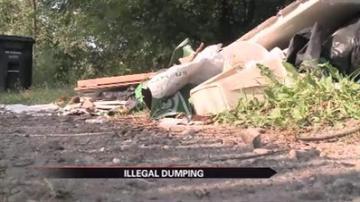 SOUTH BEND, Ind.-- People living on Elmer Street say they are infuriated after a local landlord dumped trash right in their back yards.

Residents on Elmer Street say they have exhausted about all of their options.

They have called South Bend Code Enforcement who said they are going to find the rental company $500.

They have called the rental company, Bradley/WJM Properties, who promised the trash would be removed by sundown Monday.

They have even gone as far as calling the police who told them they are going to have to clean it up themselves.

“It smells like something dead and decaying,” Elmer Street neighbor Donald Martin said.

Stinky, smelly, disgusting, even hazardous. These are just a few of the words residents on Elmer Street used to describe the trash that's piled in some of their back yards.

”We sit out here, just like today with a nice breeze and you catch a whiff of it coming every now and then. If you’re just trying to do the yard, oh Lord, that is really bad. You probably want a gas mask or something,”  neighbor Cedrik Davis said.

The property located at 1509 Elmer St. is the one that Bradley/WJM Properties cleaned out earlier this week.

“In my opinion the place should be condemned because it’s got roaches crawling around inside,” a resident who wanted to remain anonymous said.

Rather than forking over a few bucks to dispose of the trash in a city dumpster, the cleaning company Bradley/WJM hired chose to dump it in a neighbor's back yard.

“There were roaches in that cooler and once those roaches get in the grass, they could go in any house around here,” Martin said.

As the weather heats up, neighbors fear the stench will only get worse.

“It’s just going to get worse here as the week progresses because you know those temperatures are going to rise this week,” Martin said.

“This is not a dumping ground. This is our neighborhood, this is our home, this is where we grew up, everybody knows each other and we need it to stop,” a neighbor said.

Residents in the area told ABC 57 that if it doesn't get any better, they plan to take the issue to court.

We did give the rental company a call to see what their plans were for the trash, but were unable to reach them after business hours. We'll continue to work to get in touch with them for comment.