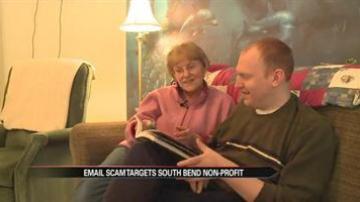 SOUTH BEND, Ind.-- A fake email has been circulating using the name of a South Bend charity. It asks for the recipient to send several thousand dollars to the Philippines to help one of the non-profit's workers.

Sister Gretchen Clark has dedicated her life to serving special needs children in Michiana. She says she's devastated that scammers are using her organization's name to scam the community.

The fake email said Sister Gretchen Clark was stuck in the Philippines and needed money because she lost her wallet and passport. The email said Clark needed to borrow $2,450 so she could return to the United States.

Sister Clark runs a local non-profit called Chiara Home in South Bend. She says this is the second time their organization has been targeted by scammers.

"You know how I feel? It’s as if somebody robbed my home. You feel violated by that," said Sister Clark.

Chiara Home's email account was hacked and the email was sent out.

Clark said it's one thing to use her identity, but another to victimize the children she's dedicated her to life to protecting.

“I’m just disgusted with it. When my name is used, when my congregation’s initials are used and when it involves the guests at Chiara home, yes I do," said Clark.

This is not a random occurrence. Just over a year ago the same organization's director was also targeted.

"They used her name and said that she was stuck in the Philippines and lost her passport, the whole scenario,” said Clark.

The hackers deleted the organization's address book, which comes at a bad time. Chiara Home has a fundraiser this weekend.

"What hurt me is I know all the work that we have to put in here to get back to where we were," said Clark.

Sister Clark said she didn't think anyone fell for the scam.