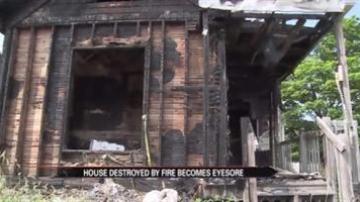 SOUTH BEND, Ind. -- A house on Bronson Street in South Bend burned in a fire on April 28th.  Fire investigators deemed the house is a total loss.  Three months later, neighbors are upset the house has not been demolished.

People who live near Bronson Street say the burned house is a monstrosity.

All that remains of the home is a burned frame and a caved in roof.

Neighbors say aesthetics are not the only problem, they are also worried about safety.

“Because if somebody does go in there that roof can cave in anytime,” said Curtis Newcomer, who lives in the house next door.

People who live and work nearby,  want the home demolished, no matter what it takes.

ABC57 took these neighborhood concerns to the Mayor’s Chief of Staff, Brian Pawlowski.  Pawlowski says the city will be doing an emergency demolition.

The city will start shopping around for a demolition company on July 29.