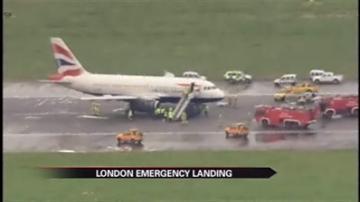 Thousands of passengers are facing delays and even cancellations Friday thanks to an emergency landing at London's Heathrow Airport.

Seventy people were on board the British airways flight to Oslo.

"Five minutes after takeoff, there was a popping sound//then about 5 minutes after that there was another loud sound, and it was clear the right engine was on fire. You could see the flames through the cabin, it was smoking quite heavily," said a traveler.

The pilot was able to land safely. Passengers had to slide down emergency chutes to exit the plane.

Three people were hurt but their injuries are not serious.