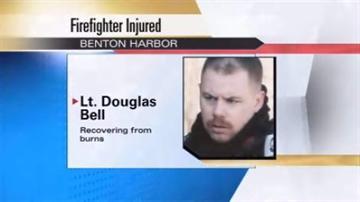 BENTON HARBOR, Mich. – A Benton Harbor firefighter is still recovering at a Kalamazoo hospital after being burned while responding to a house fire on Jennings Avenue Thursday morning.

Lieutenant Douglas Bell is in fair condition at the Bronson Hospital burn unit.

Bell was the only firefighter on duty at the time and got trapped in the home.

We asked Tony Saunders, Benton Harbor’s Emergency Manager, about whether a firefighter’s safety is worth the savings.

Saunders said it was unfortunate that a firefighter was injured.

He says one of the main goals as the city moves forward is safety for the residents as well as the people who work for the city.

As for the idea of merging police department and fire departments and training officers to fight fires, Saunders says it is a great model.

“This is a model that's gaining a lot of steam in Michigan. What we want to do is make sure that we are putting enough resources to take our public safety to the next level,” said Saunders.

While Saunders did say that while he agrees with the model he also knows the importance of extensive training.

He plans to see that continuous training is in place for everyone.