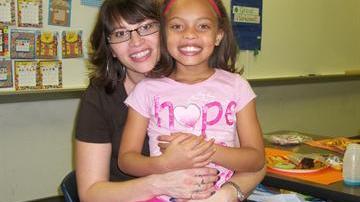 ELKHART, Ind. -- It was an emotional day for family, friends, teachers and even strangers as 7-year-old Kristyana Jackson was laid to rest Saturday afternoon. The 2nd grader was shot in the head last Friday night as her family was returning to their home in Elkhart. Police say the home intruders shot her father three times and the little girl was stuck once in the head. She died last Sunday from her injuries at a local hospital.

Hundreds of people packed Agape Missionary Baptist Church to say goodbye to Kristyana Saturday morning. There was standing room only and not a dry eye in the memorial. One person after another took to the podium to share their memories of a child who touched their hearts and minds.

Kristyana attended Mary Daly Elementary School in Elkhart. Her kindergarten teacher, 1st grade teacher, 2nd grade teacher and Principal all took to the microphone to share their positive experiences with the little girl and to let her family know they will never forget her even though she is no longer with us.

Kimi Jackson, Kristyana's mother called ABC 57 and invited our crews to share the day with them as they celebrate her daughter's life. We were honored to be there and to reflect on how Kristyana touched so many people.

Many tears were shed when three of Kristyana's classmate spoke about how they will be (BFFs) best friends forever.

Rev. Dannell Brown of Agape Missionary Baptist Church reminded the crowd that Kristyana Jackson didn't die on her own, she was in fact murdered and God did not take her from them, men working outside the will of God took her from them.

Her mother could be heard crying out after this statement and many others throughout the service. She had her husband John by her side and a constant flow of family and friends fanning her, wiping her tears and comforting her as best as they could.

Before leaving the cemetery Kristyana's Mother Kimi had a hard time saying goodbye as she held on to the casket crying continuous tears of sorrow.

Judy Ballard, Kristyana's Aunt set up a family fund at the Elcose Federal Credit Union to help the Jackson's pay for the funeral services. If you would like to donate you can call the bank at (574) 295-0093.

Police are still actively investigating this incident and homicide and the family urges anyone with information to call crime stoppers at 1-800-288-7867.