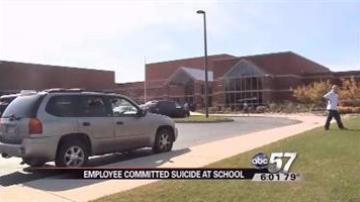 DOWAGIAC, Mich. -- A deadly discovery inside the Dowagiac Middle School has a small town community reeling.

Dowagiac police say a school employee, who worked lighting and equipment for the school's drama department, was found dead by a school custodian just before 10 p.m. on Thursday.

Police says the 19-year-old committed suicide in the back of the school's auditorium. Although police have yet to confirm it, several people say that the young man hanged himself.

Former classmates identified the young man as Issac Longden. Many old high school classmates described Longden as a happy, fun guy who would give you the shirt off his back.

"Funny, active, like to do drama and sing -- He was a real fun guy to hang around with," says former high school classmate Julian Marshall.

Julian Marshall says Issac Longden was one of the first people he met when he moved Dowagiac and started going to school at Dowagiac Union High School.

"I met him at school one day. He kept telling me I should try choir and then I saw him over the summer and he was stilling telling me to do choir, which is why I am in it this year," says Marshall.

Marshall says he was shocked when teachers at the high school made an announcement in class today saying a school custodian had found Longden dead inside the middle school where he worked.

Marshall says it was not until class let out that he found out that Longden had hanged himself in the back of the school auditorium.

Many friends and classmates, including Marshall, say they are still trying to figure out why someone who appeared so happy would do what Longden did.

"Issac was a good friend and I will miss him and thanks to him I am doing choir and doing drama," says Marshall. This tragic discovery has shock the small community and those that knew Longden say is loved and missed by all. Others, who did not know the young man personally, says their thoughts and prayers are with the family right now.