Employee of ABC's "The Chew" shot and killed 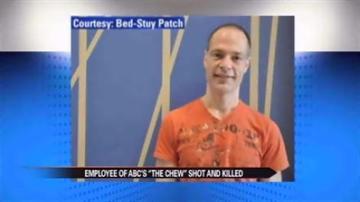 BROOKLYN, N.Y. -- A member of the ABC national family was shot and killed.

The victim was an employee of the popular show "The Chew".

Authorities believe the victim was shot and killed in an attempted robbery just one block from his apartment.

The 41-year-old scenic designer was found shot in the chest at the scene.