Emu on the loose 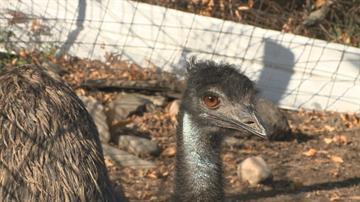 BUCHANAN, Mich. – Where is Andy the Emu?

The exotic bird escaped from its Buchanan, Mich. home on Friday and its owner hasn’t seen the bird since.

"If something frightens him, then he can jump my fence,” said Jean Wolf.

Wolf runs an animal rescue at her home on Buffalo Rd.

The 5’ tall bird that looks like an ostrich and isn’t very smart so Wolf is worried it may not make it home on its own.

“I have to find him.  Somebody has had to have seen him,” said Wolf.

Wolf believes Andy can find food on his own but faces danger from other predators.

Andy the Emu is no stranger to escaping. The reason he lives on the animal rescue is because in 2002 he escaped from his previous owner in Niles, Mich.