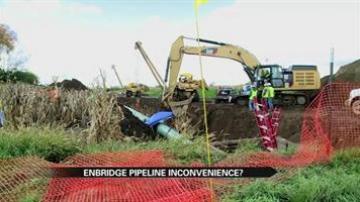 NEW CARLISLE, Ind. -- Enbridge Energy Partners are in the middle of replacing an oil pipeline that ruptured in 2010 in New Carlisle. Even though the construction of the new pipeline is disruptive, neighbors say they're happy with how the company has handled it.

Mary Ellen Weinberg lives only feet away from where a new oil pipeline is being built in New Carlisle.

"That whole area back there was trees, until one day when they came in and had to take them down," said Weinberg.

But she's not complaining about it.

Enbridge Energy Partners is replacing their crude oil pipeline that runs all the way from Canada.

Much of the pipeline runs through backyards of homes in the New Carlisle area.

"We do realize it is a huge inconvenience for those that are near it and directly affected," said Jennifer Smith, Chicago Regional Public Affairs Advisor.

But residents like Weinberg say the cooperation of Enbridge has helped to ease the blow of seeing their land be torn up.

"We train our crews and all of our land agents to be respectful and act as if it's their properties that they're working on, and also we try to keep communication going with the landowners," said Smith.

Enbridge says they still plan on being done with the construction of the pipeline by the end of this year.