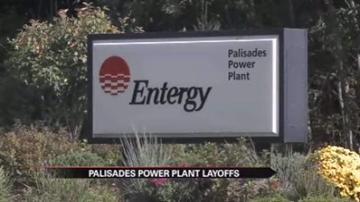 VAN BUREN COUNTY, Mich. -- More than 30 jobs are expected to be cut at the Palisades Nuclear Power Plant as part of a company-wide reorganization. At a plant that has had so many issues, how will cutting jobs help?

It has been less than 3 months since the last time the Palisades Nuclear Power Plant shut down due to a leaking tank.

Protesters lined up outside the plant calling for a permanent shut down.

The Nuclear Regulatory Commission and Entergy promised an extra 1000 hours of inspections to the plant to ensure it is safe.

Now, Entergy is cutting 800 jobs, six percent of its workforce across the country. The restructuring is expected to save Entergy almost $250 million.

"We created a new organizational structure for all of our nuclear plants and we redesigned it to ensure that we are creating a nuclear organizational structure that was the most efficient, that was the highest, that had the highest focus on safety possible and then we've taken that template and applied it to all of our nuclear power plants," said Terry Young, VP of Nuclear Communications for Entergy.

At Palisades, some displaced workers will be redistributed to different departments where Entergy determines it needs more people.

Entergy says employees who work hands-on in the plant with maintenance and daily operations should not be affected by these cuts.

But the company would not confirm that these cuts are exclusive to management.

The layoffs will happen slowly until the end of the year.

All employees will be given a guide for what positions are in question.