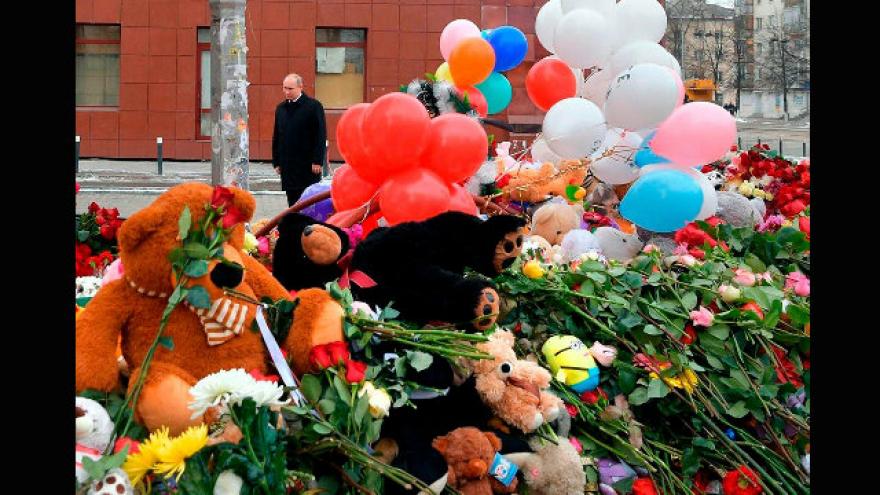 Russian President Vladimir Putin visits a memorial made for the victims of a fire in a multi-story shopping center in the Siberian city of Kemerov, on Tuesday, March 27, 2018. Photo courtesy Alexei Druzhinin/AP 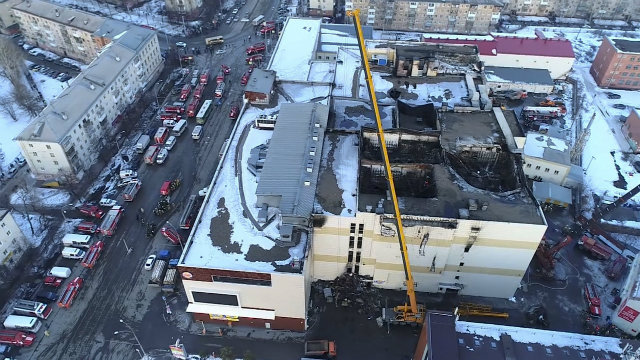 An aerial view of emergency services working at the scene of the multi-story shopping center after Sunday's fire, in the Siberian city of Kemerovo. AP

(CNN) -- Hundreds of people protested Tuesday in the the Siberian city of Kemerovo, calling for a full investigation into a shopping mall fire that killed scores, including an entire class of schoolchildren.

Russian President Vladimir Putin, who flew to the city to offer his condolences to the victims' families, declared a national day of mourning for Wednesday. Putin blamed the blaze on "criminal negligence" and promised that those responsible would be held accountable. Authorities said 64 people died, 41 of them children.

The fire tore through the Winter Cherry shopping mall on Sunday, the first weekend of spring school holidays, trapping many families who had gathered at a children's play area and movie theater there. Russian investigators said the mall's fire exits were blocked and an alarm system turned off, and witnesses described panicked scenes as shoppers attempted to flee.

A video released by Putin's press office showed Putin laying roses at a makeshift memorial scattered with candles and toys, flanked by his security detail.

"What is happening here -- this was not a combat situation, not an unexpected methane outburst in a mine," he said.

"People came to rest, children. We talk about demographics and lose so many people because of what? Because of criminal negligence and carelessness."

The origin of the fire has yet to be determined.

The Kemerovo blaze comes at a delicate domestic political moment for Putin, who sailed to a re-election victory on March 18. As the scandal about the fire tragedy unfolded, Western allies led by the EU and the US announced a coordinated expulsion of more than 100 diplomats in response to the poisoning of Russian former spy Sergei Skripal and his daughter Yulia in Britain.

Putin did not meet with demonstrators in Kemerovo, who had gathered in front of the local administration office to call for a full probe into the fire. Members of the distraught crowd cast doubt on the official death toll and demanded that the Forensic Examiner's Office verify the number, state news agency Tass reported.

Footage from the scene showed riot police standing outside the municipal building as protesters chanted: "Resign!" and "Murderers!"

"A lot of children died. They died because of irresponsibility of management," one local resident, Svetlana Shestakova, said. "I am shocked that they are hiding the truth from us."

Another man shouted: "What morgues are you saying you're sending the bodies to? The temperature was over 1,000° C. There are only ashes left!"

In response to the allegations, Mayor Ilya Seredyuk and members of a civic action group have gone to the mortuary, according to Tass.

Putin: Those responsible will be punished 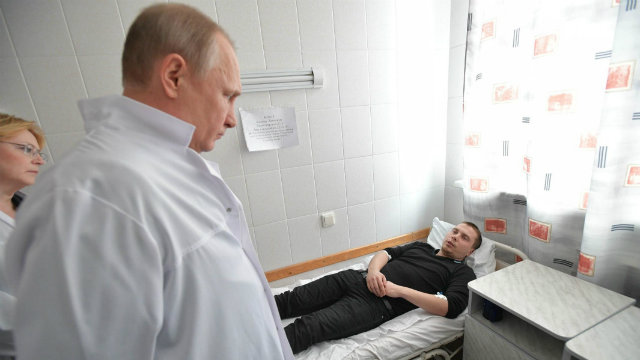 Amid calls for the resignation of regional Gov. Aman Tuleyev, Putin said that "it is not right to apportion blame right away."

He added that officials at every level will be closely investigated -- including those who issued a license for turning the former sweet factory into an entertainment center.

"Everyone will be checked one by one, from those who issued licenses to those who were supposed to ensure safety, particularly that private security company whose guard was just sitting there doing nothing and failed to push the button," Putin said.

The converted Soviet-era sweet factory reopened as a 23,000-square-meter shopping mall in 2013. It has a parking lot for 250 cars, shops, a bowling center, a children's center, a movie theater and a petting zoo, according to state media.

Svetlana Petrenko, spokeswoman for the Russian Investigative Committee, said in a statement that serious violations were allowed at Winter Cherry mall "both when the shopping center opened and after, during its operation."

"Fire exits in the shopping center were blocked," she added.

Putin also visited the regional hospital where those injured in the fire are being treated, speaking with one 18-year-old who jumped from the fourth floor of the building in a desperate attempt to escape the blaze.

A father who lost is daughter in the fire recalled her final words during the demonstration.

"I told her to lie down on the floor and breathe. 'Breathe and don't die,' I told her," said the man, who was speaking with her over the phone.

He said he ran to the mall to try to get her out of the building, but was blocked from entering the burning shopping center.

The Kemerovo fire is one of the deadliest blazes in Russia in recent years, according to state media.

Witnesses said no fire alarms were heard. Anna Zarechneva, who was in the mall's cinema when the fire broke out, said moviegoers had little warning until the blaze was well underway. "No fire alarm to be heard. The crowd broke through one narrow door. The second exit for some reason was closed," Zarechneva wrote on Instagram.

"Having jumped out of the cinema, we saw dense black pungent smoke, which completely filled the children's playground and the 2nd cinema hall -- they were completely invisible. There was already no air."

Preliminary investigations point to the fire having broken out outside the cinema.

Five people have been detained on charges relating to the deaths and safety violations in connection with the fire, authorities said.