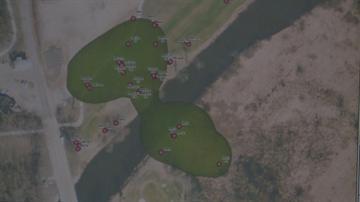 EPA officials are set to hold a public meeting Tuesday in Benton Harbor to discuss a new remediation plan for the Aircraft Components superfund site. The site is currently hole 14 on the course.

The Aircraft Components plant was torn down in 1997 along the Paw Paw River and Northshore Drive. The EPA successfully cleaned radium from the surface but soil and groundwater still carries four different contaminants.

Earlier this month we told you about the aircraft components superfund site, an old warehouse that housed radioactive airplane parts, it got torn down in the late nineties, cleaned by the Environmental Protection Agency and recently was converted into hole fourteen on the golf course.

“It could be a coincidence, it could not be,” said Benton Harbor resident Nicole Moon. “But I’m a cancer survivor and what really concerns me is that it’s in our water.”

Moon has been researching the superfund site since being diagnosed with cancer. She believes that her everyday walks through the site may have caused her diagnosis.

“Nobody knows about it,” she said.

Moon points to an environmental impact study of the superfund site showing data from March of 2012 as cause for concern.

The impact study shows the spread of vinyl chloride in the groundwater around the site from 2004 to 2012. Vinyl chloride is known to cause cancer.

Four contaminants are measured in the groundwater.

DiCosmo explains that current treatment methods at the site break down contaminants into vinyl chloride. She said the EPA expects spread of the contamination plume.

“No one is being exposed. Right now you’re not allowed to drill any wells there, nobody has any there,” DiCosmo said.

Moon said an independent review done by Ganett Flemming, a construction contractor for an adjacent parcel, indicates that contamination from the plume could enter the river water.

“Any contaminated groundwater from the park mitigation parcels could potentially vent into the river,” read the review.

DiCosmo directly refuted the claim by saying that the vinyl chloride contamination is below the level of the water table of the Paw Paw River.

The EPA superfund public meeting will be held Tuesday at 6:30 p.m. in the 200 Paw Paw building in Benton Harbor.