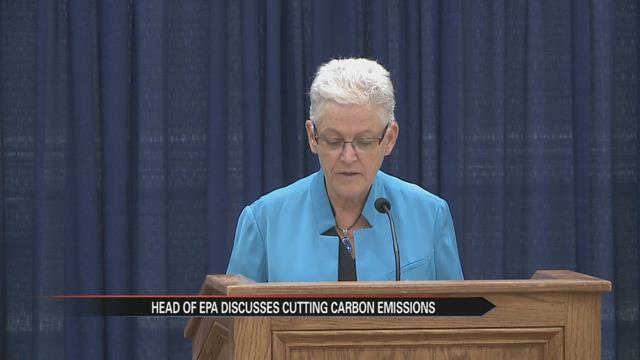 Friday, Environmental Protection Agency Administrator Gina McCarthy made a special visit to Notre Dame in the wake of the university announcing greener standards.

She also responded to resistance from Indiana’s governor to the EPA’s Clean Power Plan.

“We wanted to make sure that we made the plan, the final rule in this standards as reasonable and as flexible as we could,” McCarthy said.

McCarthy says the plan is designed to work for each state individually.

“One of the things we have done is made sure we designed the clean power plan in a way that individual states can actually achieve,” McCarthy said.

In an August statement, he said this of the plan which requires coal burning factories to lower their carbon pollution

“This administration continues to place its environmental agenda ahead of the interests of Hoosier ratepayers, jobs and the economy. Here in Indiana, homeowners and businesses rely on coal-burning power plants for low-cost, reliable energy. Yet little to no consideration was given to states like ours," said Pence.

“I think the governor is been very reasonable in saying, ‘I have to step back, I have to take a look at it, and I have to see what’s in my best interest,’” McCarthy said Friday when asked about the governor’s statement.

Pence has said if the plan isn’t changed significantly, the state of Indiana won’t comply.

McCarthy says the EPA has the right to take action if states don’t comply.