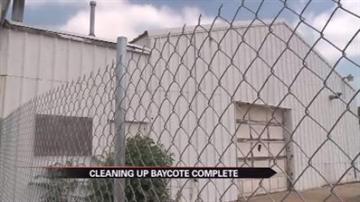 MISHAWAKA, Ind. -- In September 2012, a chemical reaction sparked a fire at the former Baycote Metal Finishing site and forced evacuations of nearby residents. The EPA has finished cleaning up the site – and it is now clear of hazardous materials.

The facility on Industrial Drive is now a shell of a building.

After months of work, the EPA took its last shipment of materials from the facility at the end of May 2013.

Local rescue crews are happy the hazardous materials are gone.

"The EPA took the winter off, then came back and did their final clean up and we did our final walk through with them in early June,” said Assistant Chief Mike Talbot, Mishawaka Fire.

Talbot says the EPA walked through with IDEM, city officials, and local fire departments to show what has changed inside the building.

"In the beginning there were chemicals that were unmarked. Couldn't tell what they really were and then at the end, all of that is gone. The building is completely cleaned out,” said Talbot.

After nearly 8 months of work all you can see now is the outline of the sign that said the EPA was here.

The EPA removed about 140,000 gallons of liquid waste and one million pounds of solid waste.

It's hard to forget the night of September 14th, when homes were evacuated and fire crews rushed to the scene of the chemical fire at Baycote.

"That's the type of fire that you don't want to have in your community. It's a rare occasion. It was something that was unfortunate but we got lucky we got it out,” said Talbot.

Now the question is what happens to the building.

The EPA says the cost of the emergency cleanup came in at about $1.8 million,

They said they're determining who will have to pay the bill.

Click here for reports from the EPA on the Baycote Facility: Link 1 | Link 2