EPA has finished cleaning up asbestos in vacant Goshen site 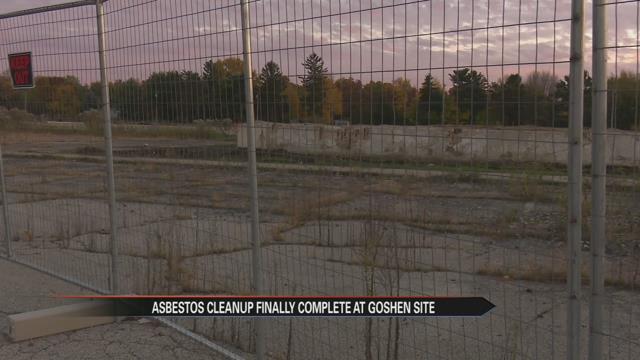 Harmful chemicals have officially been stripped from a vacant site in Goshen. The Environmental Protection Agency spent three months cleaning up 1302 East Monroe Street after an independent environmental report showed asbestos in the debris.

Fences with ‘Keep Out’ signs and the imprints of tire tracks are all that’s left in the debris of the former Johnson Controls site in Goshen.

The City of Goshen announced Thursday that the Environmental Protection Agency has finished cleaning up 1302 East Monroe Street.

“It looks like they have a little bit more to do with the concrete and stuff, but I’m excited it’s done,” said Robert Bates, who lives right behind the site.

They started the process back in August.

“I didn’t really hear about it, but I could tell that there was asbestos, because they were spraying waters as they were cleaning it up, and they had masks on,” said Bates.

Now, the asbestos is officially gone.

Robert Bates lives directly behind the site. He often sits on his backyard porch, which he estimates is about 75 feet from the fence.

While he’s glad the EPA has gotten rid of the immediate danger, he’s afraid the asbestos could have lingering effects.

“If the wind is blowing just right or something, we were concerned for our health, you know maybe in ten years,” said Bates.

But he’s hopeful for what the rubble may become.

“Hopefully a business or something good will go back there,” he said.

Now that the EPA has finished its cleanup, the owner TOCON Holdings, LLC can take back control of its property.

Check back for updates on how the company plans to develop the area.