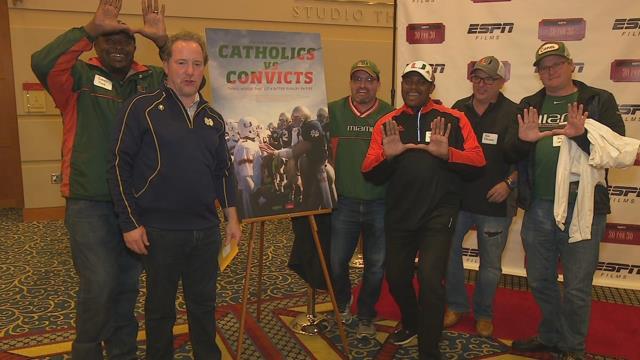 Catholics vs. Convicts—a heated rivalry between Notre Dame and Miami—is now an ESPN 30 for 30 film.

The film starts out with, “Ten thousand stitches, one fluid ounce of ink, and nineteen letters. That was the match that lit an already bitter rivalry on fire.”

The rivals are Notre Dame’s Fighting Irish and the Miami Hurricanes.

And the person who lit that match back in 1988 is Joe Fredrick.

A great shirt that turned into a decades-long controversy.

And that controversy has become an ESPN 30 for 30 film called Catholics vs. Convicts.

“Just by having that theme come to, really checking out, and people being able to hear why it was brought up and how some of the feelings were hurt because of that, it’s great to hear from so many guys from so many years ago,” said former Notre Dame football player Tony Rice.

Notre Dame fans are excited to relive that big win.

“When Pat Terrel tipped away the ball at the end, everyone had this collective sigh of yes we won this game, and I can feel it in my blood already right now pumping,” said Notre Dame alumnus Patrick O’Malley.

“This was the one that just slipped away, and I think everyone from that era still feels that palpability, and this is going to bring back a lot of emotions for a lot of people of letting that slip away,” said former Miami scout player Dominic Andreano.

The Hurricanes and Fighting Irish still can’t agree on who should win the game—both are saying it will be their team Saturday.

ESPN will be broadcasting the film on December 10 after the presentation of the Heisman trophy.