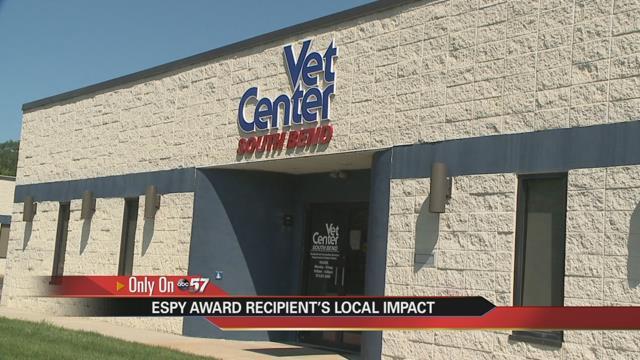 A South Bend hero is receiving a special award at the ESPY’s Wednesday night.

Danielle Green, a veteran and former Notre Dame basketball player, will walk across the stage to receive the Pat Tillman Service Award.

Green now works as an administrative leader at the Vet Center in South Bend, which offers counseling to veterans and their families.

“Danielle does not see herself as more important than the mission we have before us,” Steve Leapman, a counselor at the center.

Green’s coworkers say she doesn’t take herself too seriously.

“She likes to laugh. We all like to laugh here at the center,” counselor Mark Henson-Bohlen said.

Green will receive the award for her Army service in Iraq, where she lost her arm during combat, an injury her coworkers say she makes light of now.

“She’ll kid around about that,” Leapman said.

Green has been a Michiana hero for years, scoring hoops as a point guard for the Notre Dame women’s basketball team in the late 1990's.

It’s a title her friends say she’s pretty proud of.

“I think she gets to go to the basketball games for free,” Henson-Bohlen said.

Her coworkers say Green isn’t the type to brag about her achievements.

Green leads a humble life as a Michiana mom.

Leapman says she has even supported him in coping with his own demons as a veteran of the Navy.

“She’s helped me as a veteran deal with some needs I had,” Leapman said.

Green’s coworkers say they couldn’t be more proud to serve alongside her.