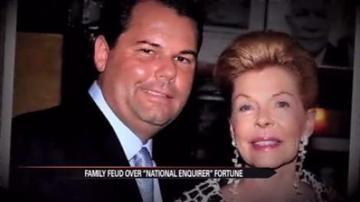 The family that once sold salacious stories now finds itself at the center of an estate battle.

The founder of the National Enquirer left a multi-million dollar estate when he died and the heiress to the fortune is battling against her son on how to divide it.

The son says his mother has sued him five times over the last 20 years.

The battle has gotten so nasty that she is seeking a restraining order against him.

"She's an actress, and she loves the limelight and she loves whatever type of attention she can get," said National Enquirer heir Paul Pope.

His mom says he has burned through his $20 million share due to an "extravagant and excessive" lifestyle.