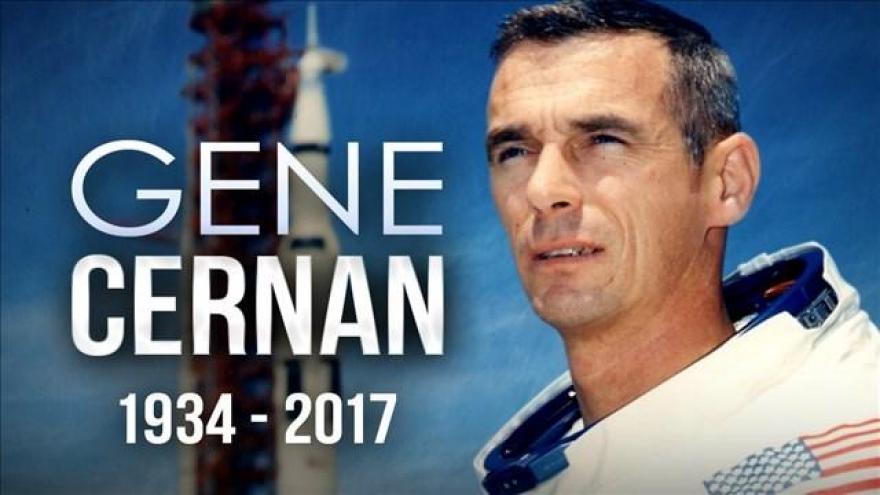 (CNN) -- Eugene A. Cernan, the last astronaut to leave his footprints on the surface of the moon, has died, NASA said Monday.

His family confirmed the news in a statement Monday, saying he died following "ongoing health issues."

"Our family is heartbroken, of course, and we truly appreciate everyone's thoughts and prayers. Gene, as he was known by so many, was a loving husband, father, grandfather, brother and friend," the family said.

Up until his death he was passionate about space exploration and hoped America's leaders would not let him remain the last man to walk on the Moon, his family said.

In his last conversation with NASA Administrator Charles Bolden, Cernan spoke of his "lingering desire" to inspire America's youth to study science, technology, engineering and mathematics "and to dare to dream and explore," NASA said.

"Gene's footprints remain on the moon, and his achievements are imprinted in our hearts and memories," Bolden said.

Cernan earned several distinctions in his 13 years with NASA. He was the second American to walk in space and one of three men to have flown twice to the moon.

But he's best remembered as commander of Apollo 17, the last mission to the moon in December of 1972.

"Apollo 17 built upon all of the other missions scientifically," said Cernan in 2008, the mission's 50th Anniversary. "We had a lunar rover, we were able to cover more ground than most of the other missions. We stayed there a little bit longer. We went to a more challenging unique area in the mountains, to learn something about the history and the origin of the moon itself."

Born in Chicago, Illinois, on March 14, 1934, Cernan received a Bachelor of Science degree in Electrical Engineering in 1956 from Purdue University, where he received his commission through the Navy ROTC Program. He entered flight training upon graduation and went on to earn a Master of Science degree in Aeronautical Engineering from the US Naval Postgraduate School in Monterey, California.

He was one of 14 astronauts selected by NASA in October 1963 for the Apollo program, created to send humans to the moon. Like others in the program, Cernan also participated in Gemini missions, NASA's second human spaceflight program, developed to support subsequent Apollo missions.

On his first space flight, Cernan became the second American to walk in space during the Gemini IX mission in 1966, led by command pilot Thomas Stafford.

On his second sojourn in May 1969, he was pilot of Apollo 10's lunar module, the first comprehensive lunar-orbital qualification and verification flight test of an Apollo lunar module.

He made his third space flight as spacecraft commander of Apollo 17, the last scheduled manned mission to the moon, in December 1972.

With the support of lunar module pilot Harrison H. Schmitt, Cernan established a base of operations in the moon's Taurus-Littrow valley and made a home there for the mission for three days. From the landing base, they completed three excursions to nearby craters and the Taurus mountains.

Leaving the moon in 1972, Cernan said, "As I take these last steps from the surface for some time into the future to come, I'd just like to record that America's challenge of today has forged man's destiny of tomorrow."

Cernan is survived by his wife, Jan Nanna Cernan, a daughter and two stepdaughters, and nine grandchildren.

His family said Cernan's life experiences had humbled him, particularly those as an Apollo astronaut.

"I was just a young kid in America growing up with a dream. Today what's most important to me is my desire to inspire the passion in the hearts and minds of future generations of young men and women to see their own impossible dreams become a reality," the family quoted him as recently saying.

The family also shared a line from his book, "The Last Man on the Moon," in which he describes walking on the moon to his 5-year-old granddaughter.

"Your Popie went to Heaven. He really did."