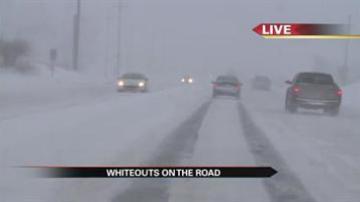 SOUTH BEND, Ind. -- Parts of Michiana could receive as much as a foot of snow through 11 p.m. Monday. The heavy snow is making driving nearly impossible because of the near white-out conditions.

Law enforcement officials say you should be extra cautious because conditions can go from bad to severe within minutes.

"Sometimes 15 miles per hour isn't slow enough for icy roads. So you're going to have to really slow down and give yourself time to stop between you and the car in front of you," said Lieutenant Tim Williams of the Mishawaka Police Department.

The snow hit just in time to make roads treacherous for the evening commute.

"I couldn't see how people go to dinner or shopping or go out to dinner., I would recommend staying home. It has been a really bad year," said South Bend resident Mike Bubelenyi.

Police expect to be out in full force ready to shut down main roads including the bypass if needed.

"It really depends on how bad the roads get and the amount of snow and types of drifts we are getting," said Williams.

To navigate around shut down roads, police encourage drivers to look at alternative routes, especially for the bypass.

They say the last thing you want is to get lost in the middle of severe weather.

"We're expecting people not to drive like they're supposed to and we just hope they get the message to slow down and have a safe commute," said Williams.