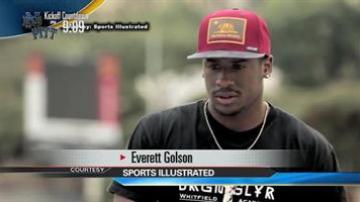 NOTRE DAME, Ind. -- The Fighting Irish pulled off a heart pounding triple overtime win last season over Pitt but this time, Notre Dame will be led by a different quarterback. Last year fans were praising Everett Golson for the win over the Panthers. This year they're talking about his revealing interview with Sports Illustrated.

Golson is currently suspended from the university and blames cheating as the reason he's not playing with his team.

It was the dive echoed around the stadium.

"I was proud of the team coming out and really realizing we could get this win," said Golson after Notre Dame's win last year.

A two point conversion leading the Irish into overtime against Pitt in 2012.

Then in triple overtime, the struggle to the one yard line.

"I felt that I got in and I just heard the crowd cheering," said Golson last year.

Out of a dog pile Golson emerged with the td and win.

"I was stuck under there and then I was like guys get me out," said Golson last year.

That win added momentum to their undefeated season that ended in Miami.

January wasn't pretty for Notre Dame when the team came face to face with Alabama. They lost the National Championship 42-14.

"That Miami game it was good being there but you know I felt completely embarrassed and that doesn't ride too well with me," Golson told Sports Illustrated.

Then in May, we learned Everett Golson was no longer a student at the university and that he was suspended for Fall 2013 due to "poor academic judgment."

"Basically I had poor judgment on a test it wasn't due to poor grades or anything like that," said Golson.

When asked if he cheated on a test, he replied, "Yeah something like that."

Golson is on the west coast working out with quarterback coach George Whitfield.

"It's been ridiculously good for me I've changed up a little bit of my mechanics," Golson told Sports Illustrated.

Golson said he's never had so many mixed emotions watching his former teammates play without him, and says he plans to return.

Golson could return to campus as soon as mid December.

He will be able to practice with the team.