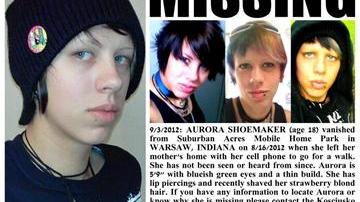 Helblig says she was the last to ever talk to Aurora.

"She was going for a walk, she told me her cell phone was dying and she would call me when she got home," Helblig recalled.

In fact her cell phone was never used again. Shoemaker, 18, was never seen or heard from again.

According to her family, she left behind four siblings, three of whom were younger than her. She also had a fiancee, they say she never talked to him again either.

"I believe she's just somewhere where she can't, whether it's physically can't or scared because of where she's at, can't get contact with anybody," said Helblig.

Aurora's older brother Spenser, 23, and father Todd, told ABC 57 that Aurora had a troubled past.

They said Aurora had trouble with drugs and alcohol and dropped out of high school. They said she often hitchhiked. All things they worry may have led to her disappearance.

"I'm just hoping we are able to make contact with her soon," Todd Shoemaker said. "I would just say I miss her so bad. I would tell her I love her very much."

Kosciusko County deputies told ABC 57 Friday that the missing person case in reference to Shoemaker is open, active and ongoing. They say they have received quite a few tips but never a substantial lead.

Crime Stoppers is offering a $1,000 reward for information regarding Aurora Shoemaker's case.