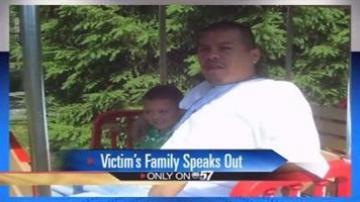 SOUTH BEND, Ind. -- The family of Cesar Flores, 32, is breaking their silence for the very first time since he was killed in front of the Anchor Inn nearly three weeks ago.

Tears were shed as his family told us their side of story. Just 24 hours ago we sat down with the mother of Ramon DeLeon, 24, who said her son is innocent. She said her son shot and killed the 32-year-old in self-defense.

Flores' family is very upset and now they want to set the record straight. They said Flores was not a gang member, that he never threatened DeLeon, and that none of his friends and family have threatened DeLeon's family since the shooting.

Cesar Flores' family is still mourning the loss of a father, a son, a brother and a soon-to-be-husband. "I keep waiting to hear his key in the door, or hear his ringtone on my phone," said Flores' fiance Emily Ewing.

It has been an emotional roller coaster for Ewing. She and Flores have been together eight and half years and have a 4-year-old son together. "He still asks me where he is at and why he can't come home from Jesus' house," said Ewing.

But now heartbreak has turned to anger, "You're mad at the fact that he is gone, you're mad that this happened, you're mad that he took him away and then, on top of that, you have someone trash talking him. That's not right," said Ewing.

Ewing said she was shocked and upset when DeLeon's mother told ABC 57 News that DeLeon shot and killed Flores in self-defense. DeLeon's mother said Flores was a gang member and that he threatened her son on several occasions.

Ewing said that is far from the truth,"He did not terrorize the neighborhood, he is not the awful gang-banger that everyone is trying to make him out to be."

Flores was shot multiple times in the parking lot of the Anchor Inn bar in South Bend. His cousin, Gabriela Delanda, was there when the argument turned gunfight.

Delanda was one of the last people to see him alive, "There was blood everywhere. I had blood all over me."

Delanda ran outside to see Flores on the ground and immediately tried to give him CPR, "He took three deep breaths and he was gone."

Flores' family still has a lot of unanswered questions as they cling to his memory. They hope, by setting the record straight, they can finally find peace and get justice for him.