EXCLUSIVE: Driver wants to thank strangers who saved his life 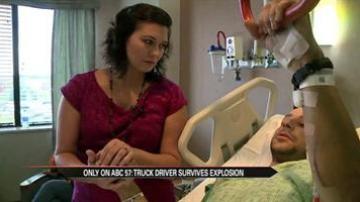 HOBART, Ind. -- A semi crash on the toll road ended in an explosion that could have killed the driver but Good Samaritans risked their own lives to save him. As he recovers in the hospital, the driver wants to thank those men who saved his life.

He's a little beat up, but he's alive.

That's why, despite his injuries, David has a big smile on his face.

"There's no doubt in my mind God was looking out for me," said David.

Tuesday morning, David was driving his semi-truck on the Indiana Toll Road near Lake Station when the accident happened.

"When I came over the blind hill there was a truck stationary there and I barely had time to react," said David.

His truck skidded off of the road and crashed into another semi.

David says he panicked and screamed for someone to help him out of his truck.

"Two gentlemen pulled me out and dragged me to the side of the road. Just in enough time for me to look up and see my truck explode," said David.

Now David and his wife Sarah want to find those men and thank them for their incredible act of bravery.

"They didn't know what was going to happen to them. They could have gotten blown up right then too. They risked their own life, "said Sarah.

David says he's grateful that his two sons still have their dad.

"Blessed absolutely that I get to see my family again," said David.

David will have surgery on his leg on Thursday. After that he'll have about three months of rehab. But he is in good spirits and happy to be alive.