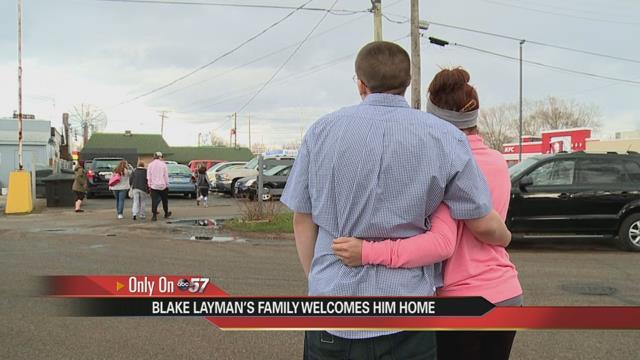 The second of the Elkhart 4 is officially a free man. 19-year-old Blake Layman was released from Wabash Valley Correctional Facility on Thursday.

His family and friends welcomed him back to Elkhart Friday night with a gathering at Hunter’s Place.

“This is what we’ve being waiting on for a long time. A sense of satisfaction in it finally being over,” said Layman.

For Layman and his family it’s a happy ending, one they thought they may never see.

“I’m thrilled to death. I didn’t think I’d ever see this day. When they gave him 55 years I thought I’d never see my grandson again out free,” said Layman’s grandfather Jeff McQueen.

Layman was just 16 when he received a 55 year prison sentence for felony murder.

Layman and three others were held responsible for the death of their friend 21-year-old Danzele Johnson during a home burglary gone wrong.

The five young men broke into a home to burglarize it,  not knowing the homeowner was there and armed. The homeowner opened fire and Johnson was killed.

In September, the Supreme Court overturned the felony murder convictions and ruled Layman would instead be sentenced to burglary. His sentence was knocked down to 10 years.

Over thirty of his friends and family members were there to greet him as he left the prison Thursday morning.

“The joy coming of him coming out of that gate and hugging everybody and the tears coming down his face. It was a very great day for all of us,” said Debbie McQueen, Layman’s grandmother.

Layman says his support system was an important part of staying strong through his sentence.

“I don’t know what I would do without them.  They’ve been my backbone the entire time,” said Layman.

Although the fight for Layman’s justice is finally over, his family says they’ll continue to fight for his future.

“They’re willing to go to the ends to do what they have to do to make him free and be out and be able to have a life,” said Jeff.

A life, Layman says, is only just now beginning.

On Monday morning he begins a new job.

“With all these guys behind me anything’s possible. I can get anything done,” said Layman.