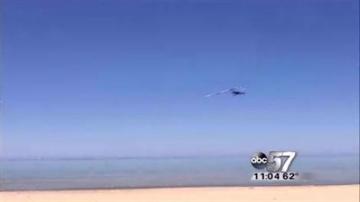 COVERT TOWNSHIP, Mich. -- ABC 57 caught up with a man, Troy Brandt, who says his kids were nearly hit by an ultralight plane that crashed Friday afternoon and he caught it all on tape.

"It came around and then did a second loop that was much lower, and then on the third loop it turned the wings and just crashed," Marilyn Stewart said.

ABC 57 caught up Troy Brandt who says his kids were nearly hit by the plane and he caught it all on tape.

"I was buried in sand with only my head sticking out and it almost hit me and another family." said Brandt's nephew.

Stewart says everyone on the beach was in disbelief.

"At first everyone was in a shock, like, oh my gosh what happened? What just happened? But when we realized the pilot and passenger weren't moving, we all ran over to them," said Stewart.

Witnesses say they tried to call 9-1-1 but cell phone reception was hard to come by.

"Everybody was just rushing because they didn’t have signal or anything so it was a big mess out here." explained Trevor Reeser.

Once first responders were reached, they rushed the victims to the hospital.

The pilot of the soft wing plane, Timothy Feathers was air lifted to Bronson Hospital in Kalamazoo, while the passenger, Dillen Smith was treated for minor injuries in South Haven.