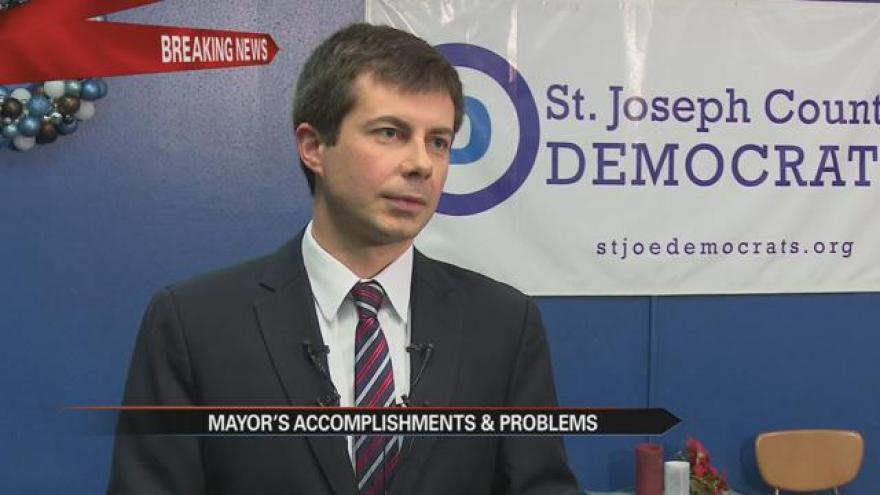 Since 2012, he’s been making changes in his home city, but he will step down as mayor if elected in the DNC.

“It all starts with the leader so having a leader able to sell a vision and get people to buy into that vision,” Jeff Rea, president of the South Bend Regional Chamber of Commerce said.

Statistics show an economic upswing for the city.

According to the Bureau of Labor Statistics, the South Bend area’s unemployment rate has dropped from 10.2% to 5% since Buttigieg took office in 2012.

Rea some of this is due to timing, and some is due to the mayor’s leadership.

“Business leaders have found we have a business man, if you will, someone who understands sort of the risks and the challenges that they take. Running the city like a business,” Rea said.

IUSB political science professor Elizabeth Bennion says this business mindset is why so many business are investing in South Bend, and the civic pride is why they stay.

“Something like a lights display or a flag that can be represented on t-shirts and coffee mugs are ways to celebrate a shared identity and a positive outlook on the future,” Bennion said.

Bennion says with so much focus downtown, some neighborhoods may fee left out.

“I think he would probably agree with me that the greatest challenge perhaps he continues to face is making sure that nobody feels left behind. This is something that some critics have noted that not everybody in the city feels that they’re part of this downtown development for example, and they want to make sure that they’re neighborhoods are not overlooked,” Bennion said.

Moving forward, both Bennion and Rea say the project Buttigieg may be most known for is 1000 homes in 1000 days.

“The mayor launched his 1000 homes in 1000 days and there’s always going to be critics of that particular approach but he exceeded that goal in dealing with vacant and abandoned houses,” Bennion said.