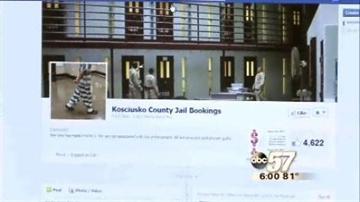 KOSCIUSKO COUNTY, Ind. -- The Facebook page Kosciusko County Jail Bookings publishes the names of everyone arrested in the county every day. The fairly new page has over 4600 likes already.

Kosciusko County is known more for its crops than its crime, but one group is leaving that notion behind.

"We're just really good at presenting it in a way that people are open to. The way they want it."

Two men, who wish to remain anonymous, are partly responsible for Kosciusko County Jail Bookings --a popular new Facebook page about arrests in the Warsaw area.

So whether you're booked for murder or on a drunk driving charge, they'll share your name for the world to see.

"I see no difference in a small crime or a large crime. It's all public information."

They worry someone might retaliate if their identities were revealed.

They say they're not trying to embarrass anyone. They're trying to shed light on problems facing their community.

"Community officials need to realize - look, just within the last two weeks, there was 13-14 DUIs, and that this county might have a drinking problem."

But some would argue that's a job best left for law enforcement.

"There's no affiliation with any of our employees or our agency at this point and time," said Sergeant Chad Hill of the Kosciusko County Sheriff's Department.

Hill says the Kosciusko County Sheriff's Department is all for transparency, but there are certain things they can't publish for free online.

Crash reports, for example, have to be purchased due to state law.

"Something like this in nature is something we actually had been working on for the near future. We're just trying to get some of the logistics worked out," said Hill.

The page is perfectly legal. There are concerns as to how they're getting their information. Both the administrators of the page and the sheriff's department say the info is not coming from police.