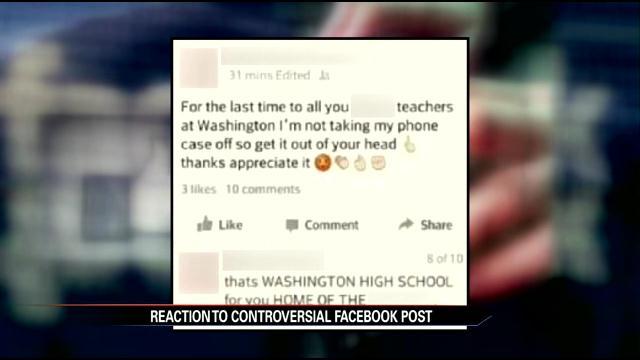 Basically, the students calls teachers at the high school a derogatory and racially-sensitive term.

People across the area are upset.

ABC 57 News has received several calls and e-mails into our newsroom alerting us of the issue, including one call from a former Washington Panther, who can't believe this is happening at her alma-mater.

“It makes no sense and I don't understand,” says Whitney Humphrey, Washington High School class of 2006.

Humphrey is frustrated that someone would say this about her former teachers.

A current teenage student wrote a status after being reprimanded for her phone case.

She uses the “N-word” directing the slur at her black teachers.

“That hurts me and it hurts the school system, as well,” says Humphrey.

The sour term stings Humphrey, being a black woman with a lot of family that's attended Washington High.

She believes the word is being thrown around too casually.

“If she knew what that word actually meant, she would go back and say, ‘Oops! I'm sorry,'” says Humphrey. "She thinks the ‘N-word' is considered to be the same as 'Afro-American' and it's not.”

She says she's learned to let it go.

“I just shake my head and ignore it,” says Humphrey.

Director of Communications, Susan Coney, sent out this statement:

"There was an incident today at Washington High School where a student made unacceptable and intolerable comments on Facebook. The school administration and Corporation do not and will condone this kind of behavior and language used by the student. The student is facing disciplinary action."

"If that was me, I wouldn't even let her come back to the school, period,” says Humphrey.