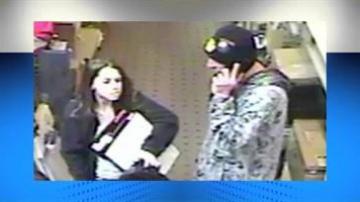 MISHAWAKA, Ind. -- The owner of a local store is turning to Facebook to try and help find two people who allegedly stole some high ticket items. He posted photos of the suspects on his store's Facebook page and has received several tips online.

The owner of Village Bazaar Value Store Rob Horn says ten people have called him or sent him messages on Facebook with tips about the identities of the suspects.

Horn says about half of the people who have contacted him gave the same names.

He says the tips were about a couple known for stealing big ticket items and turning to pawn shops to cash in on them.

Horn says he wants pawn shops to be on the alert.

Police believe the woman behind the counter in the surveillance photo is one of two suspects who pocketed some big ticket items.

"The laptops and high ticket items like that are kept behind the counter and they were nicely lined up on one shelf and when two lap tops are missing from a shelf it's pretty obvious," said Horn.

Horn says they also stole a Z-Scale Train Set worth $600, two Toshiba laptops with a retail price of $800 and a pair of Dr. Dre Beats headphones.

"And they stole a backpack from here to shove it all in to steal it," said Horn.

Horn was surprised at the response he got on Facebook.

"Did not expect what happened afterwards. I mean in the course of hours it went viral and I think at this point this morning we're nearing 40,000 views of the shot," said Horn.

"Definitely help the investigating officer. And all of these same people point toward two individuals with names and sending me pictures privately on Facebook of who they suspect it is with even some jaded background on the two individuals in question, so social media can be really beneficial if it's used right," said Horn.

Police say they've not yet captured the suspects but the outpouring of assistance from the community is helping.