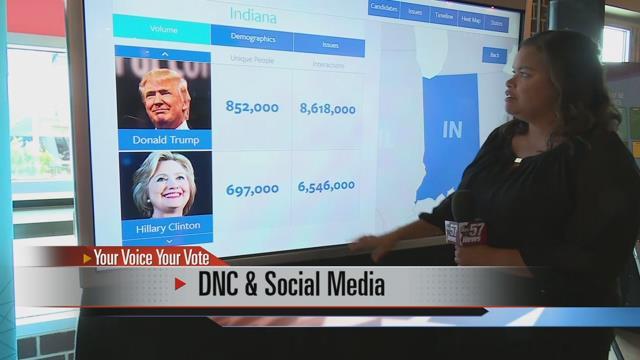 Facebook is helping to track data about the Democratic National Convention with a data touch screen.

As expected, the conversation around Hillary Clinton has spiked.

On Thursday, ABC 57 talked with Carol Peterson about the use of the system.

"We are here to help people create content, help people show what is happening at the convention so they can get a front row seat," says Peterson.

The website is jumping into politics by tracking likes, posts, and shares around both presidential candidates.

In Indiana, hundreds of thousands are creating Facebook traffic for both candidates with 852,000 people talking about Trump and another 697,000 talking about Clinton.

The website is also tracking issues that matter to those on social media.

According to the data, Hoosiers’ top five concerns are religion, government ethics, crime and criminal justice, education, and abortion.

Peterson says, "The issues that are percolating in Indiana are slightly different than the ones that are national and probably reflect a lot of the local debates that are happening.”

The website will also track if Clinton’s Facebook popularity will rise after her historical moment of being the first woman to accept the presidential nomination of a major party.