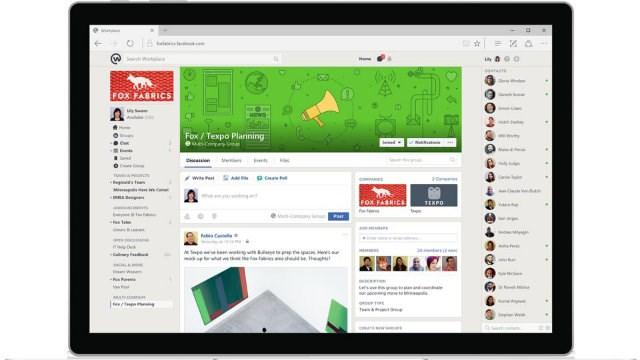 NEW YORK (CNNMoney) -- Facebook is already the center of our personal lives. Now it wants to own our work life too.

Facebook officially launched a service on Monday called Workplace. It's intended to let employees chat with colleagues to get work done -- as opposed to the usual reason we use Facebook at work: for distractions.

Workplace looks and feels like Facebook, complete with the usual mix of News Feed, Groups and Trending stories, but it's focused specifically on your company.

Employees can use Workplace as an online bulletin board to follow company announcements and events. They can also organize Facebook Groups within the company or between firms they do business with. There are options to message or call coworkers and to watch live stream Q&As with top executives.

Workplace is entirely separate from your personal Facebook network -- and can be used even if you don't have a personal account.

The service, previously called Facebook at Work, had been in beta testing since last year. There are more than 1,000 businesses globally already using Workplace, ranging from the Royal Bank of Scotland to Booking.com.

Julien Cordoniou, the director of Facebook at Work, said the service would stand out from the pack in part thanks to the ubiquity of Facebook itself, which is currently used by 1.7 billion people a month.

More than that, Cordoniou says Workplace was built as a mobile-first tool that can easily be used by retail workers and those who don't work traditional desk jobs.

Workplace may mark another milestone for the company. It appears to be the first time that Facebook is charging a subscription fee.

Facebook will charge companies a monthly fee per user, with rates varying depending on the total number of employees. If a company has 1,000 employees on Workplace each month, it will pay $3 per user. If it has between 1,000 and 10,000, it drops to $2 per user.

Facebook's total sales hit nearly $18 billion in 2015, up about 50% from the year before, with the vast majority of that coming from advertising revenue. Workplace could open up a new revenue stream for Facebook and help prove to investors that it still has plenty of room to grow.

For now, Cordoniou says Facebook's focus is on "adoption and retention" rather than sales.

"We want to grow to have hundreds of millions of people using it and then just as we've done for Instagram and Messenger, we will care about monetization," he says. Of course, unlike those other platforms, Facebook is making money from Workplace right away.

Workplace is based on how Facebook employees and CEO Mark Zuckerberg have long been using Facebook at work, according to Cordoniou.

"Even today, when our CEO wants to talk to everyone in the company, he is posting something in the main [Facebook] Group. I do Facebook Lives with my team," Cordoniou says. "That's how we've been running the company for years."