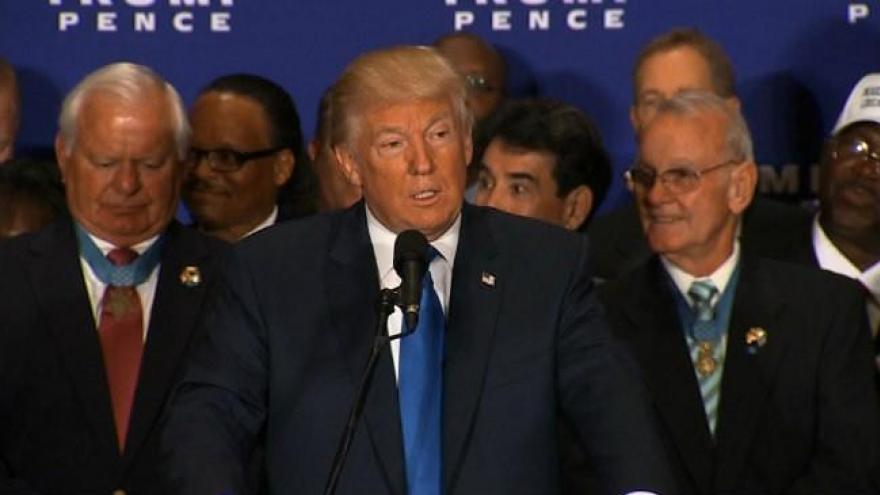 "North Korea just stated that it is in the final stages of developing a nuclear weapon capable of reaching parts of the U.S. It won't happen!" Trump tweeted.

Trump quickly followed that up with a charge that China was doing nothing to help the US cope with the rogue nation.

"China has been taking out massive amounts of money & wealth from the U.S. in totally one-sided trade, but won't help with North Korea. Nice!" Trump wrote.

The President-elect launched his verbal missiles after the autocratic 32-year-old North Korean leader declared in a televised New Year's Day speech that his military is on the brink of testing its first intercontinental ballistic missile: a rocket that can be equipped with nuclear weapons and is powerful enough to reach any part of the US.

While US officials and military experts doubt many of Kim's boasts, Trump may very well have to deal with an ICBM test and confront the danger Pyongyang poses to international stability.

The hermit nation poses a unique threat. While the nuclear nations of China and Russia are both pushing back against US power across the globe, they are more integrated into the international system and neither is as erratic or threatening. This all moves Pyongyang to Trump's front burner as a simmering problem that might soon boil over.

Kim declared Sunday that his goal was "to cope against the vicious threats for nuclear war by the Imperialists," a sinister nod to the US and its Asian allies

North Korea has been steadily working to improve its missile and weapons capability, conducting a fifth nuclear test in September.

American analysts say there are still questions about Pyongyang's claims of technological advances -- particularly to key elements required to deliver a nuclear payload -- but the picture is still worrisome.

"It's a very real and growing threat," said Bruce Klinger, a senior research fellow at the Heritage Foundation. "Think Don Corleone, but with nuclear weapons."

"This is the worst regime in the world trying to acquire the worst weapons in the world and the means to reach the US with them," Victor Cha, a senior advisor at the Center for Strategic and International Studies, said of North Korea. "In terms of a direct threat to American security, this is it."

He said that threat is different than that from major powers Russia and China.

"With Russia and China, we're mutually deterred" because of nuclear capabilities, he explained. "With North Korea, you just don't know what this guy is going to do."

Pyongyang has a million-man army poised along the border with South Korea, where US forces are based. The state engages in massive counterfeiting operations of the US $100 bill and in the manufacturing of methamphetamine. US security officials place it in the top five cyber threats worldwide. It has an estimated 16 to 20 nuclear weapons and is steadily working to miniaturize them and improve the range and accuracy of missiles to deliver them.

North Korea's new boast about an ICBM that could deliver those weapons to the US comes as Washington is undergoing a leadership transition -- always a fragile time -- and South Korea is in political disarray, with its president temporarily stripped of her powers because of corruption charges and facing a court ruling on whether she should be reinstated or removed from office.

"This is not just saber-rattling to get attention," Cha said. "This is an actual military goal they're seeking."

And they're well on their way, despite repeated international attempts over decades to slow Pyongyang's program through sanctions and diplomacy. North Korea conducted an unprecedented number of missile tests in 2016 and a satellite launch that experts call a sign that it has cleared significant hurdles toward ICBM technology.

It has already notched other potentially lethal successes.

Pyongyang fired a submarine-based ballistic missile in August, a weapon that South Korea has no viable defense against, said Klingner, a former chief of the CIA's Korea branch. After the test, the South Korean Defense Ministry revised its estimate on the North's ability to deploy submarine-launched missiles from around four years to as little as a year.

The country likely already has working nuclear warheads for its Nodong medium-range ballistic missile, which threatens all of South Korea and Japan, experts say.

And Pyongyang's intermediate range missile, the Musudan, can hit Guam, the location of a major US military base and a critical node in the defense of the western Pacific Ocean. It isn't clear whether North Korea has the ability to put a nuclear warhead on the Musudan yet.

The ICBM would be the next level up, putting the continental US within Pyongyang's deadly reach. US four-star generals, including Gen. Vincent Brooks, who leads US forces in South Korea, and Adm. Harry Harris, head of US Pacific Command, say North Korea is nearing that capability. Other experts don't think Pyongyang is quite there yet, but say it likely will be within Trump's first term.

Bruce Bennett, a a senior defense analyst at the Rand Corporation, says that despite North Korea's apparent progress on a warhead, it doesn't yet have good enough missile and rocket technology to deliver a nuke.

A key question is whether they have the technology that would allow the missiles to re-enter the atmosphere. North Koreans have this capability for the intermediate range Musudan missile, which can hit South Korea and Japan. It's a harder technological feat to achieve re-entry capability for an ICBM, which is subject to higher temperatures and greater velocities.

For now, US military officials told CNN that they assess that North Korea still hasn't mastered that technology or key elements of firing and fuzing a weapon.

"They're likely further along than many experts and pundits give them credit for," according to Klingner. "We may not know where they are on that path, but we know they're on it."

Kim boasted in his New Year's remarks that his country has successfully tested a variety of ICBM technologies. "Research and development of the cutting-edge tech weapons are actively progressing and strengthening our defense capabilities, including last-stage preparation of tests for intercontinental ballistic rocket launch have been continuously succeeding," he declared.

If the young leader goes ahead, an ICBM test would be a flagrant violation of numerous United Nations resolutions and beg a response from Trump.

The President-elect has called Kim a "maniac," but has also said he would sit down and negotiate with him, a break from long-standing international norms.

A test would also deepen worries in South Korea and Japan, already rattled by suggestions from candidate Trump that the US should cover less of their defense and,  in another violation of international norms, that they should develop their own nuclear programs.

And it would immediately increase tensions between the US and North Korea's closest ally China, which Trump has suggested has "total control" over Pyongyang.

If China won't rein North Korea in, Trump has suggested the US should "make trade very difficult" with Beijing. He has also suggested that he would have China assassinate the North Korean leader to make him "disappear in one form or another very quickly."

Cha said the decision to stop North Korea from reaching the point where it could deter the US by threatening Honolulu or Los Angeles with destruction will be a personal one that the President-elect will likely have to make. While some experts estimate Pyongyang will have an ICBM by 2020, Cha thinks it will be sooner.

"If the President decides this can't stand, then all kinds of options open up for him" to take action, Cha said, including significant shifts in the US force posture in Asia and exerting greater pressure on China.

CNN's Bex Wright in Hong Kong contributed to this report.