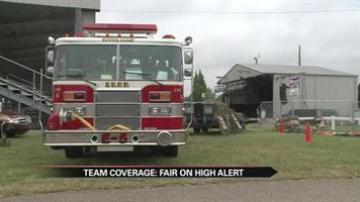 Hundreds of people are expected to attend the Randy Houser concert Monday night. It will start around 9 p.m., shortly before the severe weather is expected to pass through.

"We're pretty hearty people; we deal with it," said Jim Caldwell, President of the Fair Board.

For Caldwell, preparation is key.

He and his staff are following the weather and securing booths in case the weather turns bad.

Caldwell says there's no specific wind speed that causes an evacuation, but if things start to appear unsafe, fairgoers are rushed indoors to wait out the storm.

Firefighters are also nearby should things get dicey.

She and other emergency responders are patrolling the fairgrounds to help as needed.

Last year, there were three incidents where the weather required temporary closures.

"They have all these buildings to shelter in if the weather were to turn bad," said Carr.

"This is Indiana, so the weather changes on a regular basis," said Caldwell.

While it's still unclear how severe the weather will be, volunteers are doing their best to make sure all fairgoers stay safe.