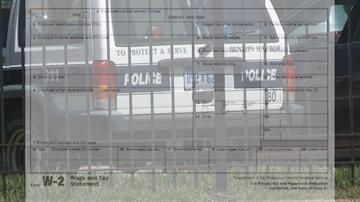 BENTON HARBOR, Mich. - A fake tax service was busted by police in Benton Harbor. According to Berrien County Court documents numerous people and the government was scammed.

Donald Garland and Linda Rowe are behind bars facing 20-year felonies for criminal enterprise conduct. Police say they made fake W-2s to maximize their victims return and took money from each of them.

Garland and Rowe ran the business ‘General Alliance Tax Service’ out of their apartment building on the 100 block of Pipestone Avenue. The couple allegedly filled out more than 30 people’s state and federal taxes with fraudulent information to maximize refunds.

According to the Benton Harbor police complaint, the W-2s filled out for each victim included false business information. Investigating officers found boarded up or completely fake businesses for the addresses filed.

“It’s very scary,” said Anthony Sutherland, a neighbor of one of the victims listed on the complaint.

Sutherland said he can see how easy it would be to get scammed. He has a third party file his taxes but checks it over. “I have faith in them but it doesn’t mean I don’t keep my guard up to pay attention to errors or mistakes.”

Garland and Rowe didn’t show their victims any of the paperwork.

According to the report, each return was filled out on Taxslayer.com and deposited into a Chase Bank account. The couple would pay their clients after skimming off between $1,000 and $3000.

Sutherland doesn’t know how it would happen. “Insurance people have to have carrier numbers.” He said. “Doctors need to have numbers. These people should have to be registered with the IRS before they’re allowed to pay people’s taxes”

Benton Harbor police raided the apartment and found tax paperwork dating back to 2010.

Garland and Rowe are awaiting their next court appearance on April 25th.