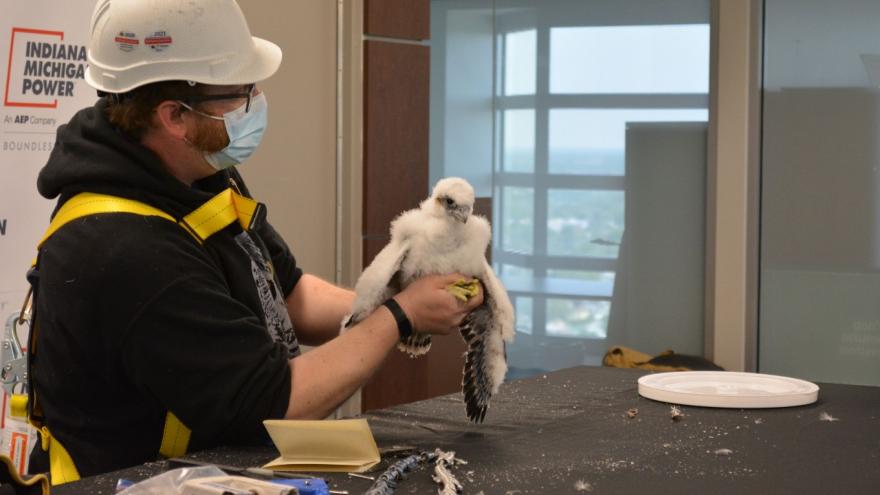 FORT WAYNE, Ind. – The peregrine falcon chick who hatched atop the Indiana Michigan Power Center in Fort Wayne has been banded and named.

This is the 9th consecutive year falcon father Jamie and mother Moxie have watched their falcon chicks get banded. BeeGee is the 64th chick to hatch and be banded at the IMPC since 1996.

“The banding requires us to remove the chicks from their nest for a brief time, which is unexpected for the parents. They acted like any parent would trying to protect their young and expressed their displeasure until the chick was returned,” said Bumgardner. “The numbered band will help us track the movement of the Midwestern peregrine falcons, which after maturity can settle up to 200 miles from where they were raised.”

Student groups were not able to watch the banding and hear a presentation from Soarin’ Hawk Raptor Rehabilitation in person this year but the Boys & Girls Club of Fort Wayne, along with I&M customers, were able to help name the falcon.

After more than 1,000 votes on I&M’s social media channels, BeeGee was chosen.

You can watch BeeGee, Jamie, and Moxie in their nest above the city on the FalconCam 24x7 by clicking here.