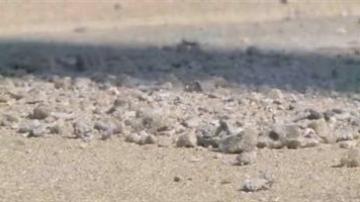 MICHIGAN CITY, Ind. -- Small bits of crumbled rock are the only thing that remains of the statue honoring fallen Michigan City firefighters.

Something, that has the city's Fire Chief, Ronnie Martin, upset.

"It's a very tragic event, and hopefully it's something that will stop," said Martin.

This past weekend, he Michigan City Mayor, Ron Meer, got the news that vandals had desecrated the 11-year old statue for the third time this year.

"When it happens to a dedicated memorial to either war veterans or the people who serve your community, that's difficult to comprehend,"said Meer.

The Mayor isn't sure why vandals are attacking this particular statue, but he said it needs to stop.

Once the statue is repaired, it'll be reinstalled along with new survelliance cameras. Meer said it's $4,000 he wishes he didn't have to spend.

"There's so many other things we could be concentrating our efforts on, but it needs to be addressed," said Meer.

Ernie Serhal was fishing when he got the news.

He's lived in the city for decades, and just can't understand why somebody would disrespect firefighters.

"They probably don't realize what they're doing or who they're offending," said Serhal.

Serhal and people like Fire Chief Martin said this type of behavior is unacceptable any time of the year, but especially now, with the September 11th Memorial occuring next week.

"As a society, we always need to be vigilant of remembering there are other people that gave something of themselves for others,"said Martin.