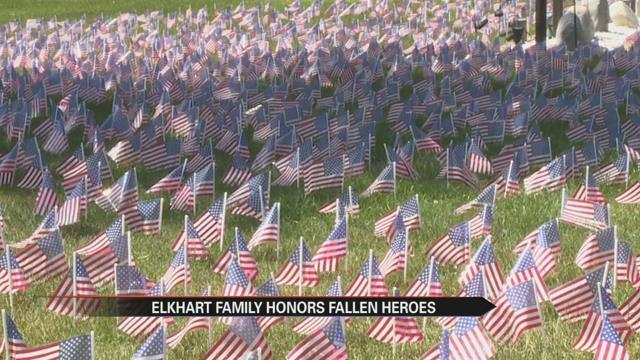 Driving through Elkhart you may have noticed one home is going all out for Memorial Day.

“When you look at that number it’s just a number but when you see the number, it’s a little bit more impactful,” said Debbie.

Every flag represents a soldier who has died since 9/11.

“He was this big, playful, very intelligent, good-hearted man, who always kept his cool and used his brain and he didn’t sweat the little things ever,” said Debbie.

For Jesse and the other sons and daughters killed on duty, Debbie says the flags serve as a reminder that 6,855 is not just a number.

“We just want to remind everybody what Memorial Day means. This is for those who paid that big price to make sure it doesn’t come here. It is our duty to make sure they’re not forgotten and I take that very seriously,” said Debbie.

On Saturday June 4 Debbie’s charity Jesse’s Warriors will hold a memorial ride Elkhart to raise money for soldiers and veterans.