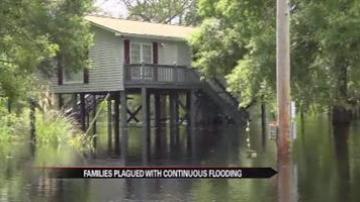 HORRY COUNTY, S.C. — People in one South Carolina town say that the widespread flooding doesn't always have to ruin your neighborhood.

Families are actually starting to get used to living in the high water.

One couple says they now make this nearly one-mile boat trip every day, just to get to their own home.

Flood waters are familiar to folks who live next to the river, but for several people in this neighborhood, it seems like of a sudden they're living on an island.

The constant rainfall during the past couple of weeks has added up. And forecasters say it's not finished yet.